1872 - Newtown - Establishment of a Corn Market

A meeting of farmers and other residents in the neighbourhood of Newtown St Boswells was held in Messrs Swan & Sons Auction Mart for the purpose of considering the propriety of opening a Corn Market at Newtown.  It was agreed that there should be both a bulk and sample market
and the general feeling was that the market day should be Monday, the day on which there is always a large congregation of agriculturalists and others in
Newtown attending the auction sale of Mr Swan and Mr Davidson.

There is a proposal in connection with this movement to erect a Corn Exchange and the Committee have been instructed to look after a site for
the building and to make arrangements.  In the meantime, Mesrs John Swan & Sons have offered the use of their auction mart to the projectors of the undertaking for the market. A vote of thanks was accorded to Mr Sommerville for presiding and a similar compliment having been paid to Mr Swan for giving the use of his Mart for the meeting, the proceedings terminated.
(Border Advertiser -  1872)

This Exchange was opened on Monday by Mr Robert Sommerville, Charlesfield, Chairman of the Board of Directors.  The gathering of business men was
large, the buyers from a great many distant towns were present.  The site which has been procured from Messrs Swan & Sons is a most convenient one being within a few yards of the railway station and bids fair to become the most important market place in the South of Scotland.

This thriving little village is fast becoming of great importance.  The large weekly cattle sales, besides the great special sales held so often, bring such a large number of farmers, buyers, sellers and visitors, that the village presents a very busy aspect these days.

No expense has been spared by Messrs Swan & Sons to make their premises in every way comfortable and suitable and as near to perfection
as is possible for sale premises to be made.  Last week at the great special sale and annual show the gas was taken into the sale ring and a grand gasatier with forty-eight burners lighted up the place in beautiful style.

On special sales days we have no less than six houses for supplying the public with refreshments. The Railway Inn has lately been almost doubled in size, as well as in rent and what used to be the small public house was lately sold for about double the price it would have brought had it been sold two years ago. It has also changed tenants and the rent doubled. The enterprising incomer making great improvements on the old premises and adding a large dining salon to it. The house goes under the name of the Black Bull Inn, the outside has been painted and white washed;  the inside thoroughly cleaned, painted, papered and all tastefully finished.

But, after all, on these great sales days a great want is felt in the village in the form of a cheap or working men’s public house, where tea, coffee and provisions could be had at a reasonable rate, as the present houses all aim above the mark of the working man.  Such a shop, however, will not easily be got on account of the scarcity of houses and the great rise in rents from them having been more than doubled during the last two years.  There is also plenty of room for a good bakers shop, no such establishment having as yet been planned in  the village.
(BORDER ADVERTISER)

Melrose Lammas
Fair  1874 - This old established fair, at one time so important for the sale of lambs, cattle, etc was held at the foot of the Eildons at Melrose on Wednesday.  Lambs calculated to be around 8,000 showing a decrease of 17,000 since 1872.  This great falling off in the numbers is attributed to the quantities disposed of at the auction marts.
(Border Advertiser 1873)

During the week the deserving poor of Newtown have been liberally supplied with coals and provisions by Messrs Swans & Sons, Cattle
Salesmen, who deserve great praise for their open heartedness in thus adding to the comforts of those around them.

On Saturday evening while some men were taking cattle out of the trucks at St Boswells station, one got furious and ran off, first coming in contact with the new water fountain knocking the metal portion to the ground.  It afterwards went down the village and caused much mischief, alarming the whole
inhabitants.  It broke into Mr Johnston’s garden and did a good deal of damage there, and then went down by the back burn and was lost for the night but was secured on the Sabbath morning in the Orchard.
(Border Advertiser 1877)

At Mr Davidson’s Sale Ring on Monday, a cart of swede turnips was displayed which caused considerable attraction from
their great size and rare quality.  They grew on a field outside of the sale ground belonging to Mr Hogarth, Newtown Mill.  The turnips were
manured with “Gouldings” mixture.
(Border Advertiser - 1875)

Newtown -  Exposure to Sale of the Corn Exchange 1877

The Corn Exchange was exposed to sale by Public Roup on Monday.  Mr Scott, Auctioneer, Lilliesleaf officiating as auctioneer and Mr T E Boog,
Timpendean as Judge of the Roup.  Mr Ralph Dunn, Writer, Melrose having read the articles of the Roup, the building was set up at an upset price of £175.  The only offer made was £150 by Mr Scott, Gattonside Sawmills and the sale was consequently adjourned for a fortnight.
(Border Telegraph 1877)

On Friday evening last, an amateur concert was given in the Auction Mart in aid of the funds of the Library.  Mr Robertson, Teacher, presided.  The vocalists, principally from Kelso acquitted themselves very creditably, several being deservedly encored.  The programme was supported by the
comic element and humorous readings.  There was a fair audience, the weather not being unfavourable.  At the close a hearty vote of thanks
was given to the performers, to Mrs Brydon for the loan of the [piano, to the Chairman and to Messrs Swan for the use of the Mart.
(Border Advertiser 1888)

On Monday evening, the Harvest Home of John Swan& Sons, Nortonhall, was held in the Corn Exchange, Newtown, when a full house
turned out. Along with their employees, they invited many friends and a large number of villagers.  The entertainment was given in the shape of a supper and ball afterwards, with no intoxicating liqueurs on the premises (which was a very great improvement) and came off well.
(Border Advertiser 1875)


‘At times the cows would run out of the mart and go as far as the Glen. Sometimes they ran down the street and we’d all get sticks to collect them
again.’ Mary & Beanie Lothian, Laurel Bank, Tweedside Road.

Messrs A Davison & Sons held their monthly sale of Irish Store cattle on behalf of Mr Arthur Mullan at Newtown St Boswells when they presented 410 polled bullocks and bullock stirks,The larger proportion being strong bullocks.  There was a good attendance of distant buyers but not so many local
ones. Big fleshy cattle sold readily, small sorts were slower to sell, but made prices similar to those of recent weeks and a complete clearance was
affected.
Coloured polled steers - £20.10/-
Strong stirks  -  £15
Small stirks  - £10 to   £15
(Border Telegraph 1936)

“When there was a sale at Davidson’s Mart some local women would go there to draw milk from the cows. This was welcomed by the Mart officials and farmers as it prevented the cows from suffering – milk would be pouring from their udders  The chap in charge of the Mart told them which cows to milk.
The pails of milk were held steady by wooden frames which the women carried.  The milk was then sold to the villagers.”

“I remember well the women coming up the road from the Mart with their pails of milk.  Mrs Redpath, her daughter Babs Simpson,
Mrs Allan and Mrs Porteous and her sister.  I believe some put up the milk in bowls and skimmed off the cream and made butter.

After the fire at Davidson’s Mart for years the ground lay waste, just rough ground.  A steam fair came with a barrel organ – they came from??    -      I’ve never forgotten the hurdy-gurdy and the side shows”.

Market Days
These were very busy days, summer sales brought thousands of lambs from the South of Scotland to the North of Scotland to both Swans and Davidsons.
This kept people in employment handling the lambs, and 40-50 trains left the Goods Yard daily during the peak time.  Parks all around Newtown offered grazing to sheep on overnight stay before being driven by shepherds and dogs to the sale.

Newtown  -   Furniture Sale    -    1936
Messrs John Swan & Sons held their annual furniture sale in the Mart on Saturday.  There was a large number of buyers and bidding was very
brisk.
(Border Telegraph 1936)

After the hirings people often sold some of their furniture before moving on to the next place, or buy something if they were going to a larger house.
The May sale was the best one, always a good crowd at that one.

The sale started in the morning and went on all day – you dared not leave it in case the thing you wanted came up – everything was numbered but we liked to see what everyone else bought as well.

It was the end of the war and my mother said “we could do wi’ another bed”.  So this bed came up – a really good one – and I bid for it.
Well in those days there was a limit to the bidding and four of us wanted the bed – I think the seller put the price on.  So Peter Rutherford, the Auctioner
brings out his pack of cards and the highest score took the item – so Shackleton got the bed that day.

Peter served his apprenticeship as an auctioneer at Swan’s Mart and there he was years later when I was buying the bed. He was a
local man – he knew everybody – he used to patter away as the bidding went on – yes, it was a great day out”.

Davidson’s Auction Mart on the Bowden Road was burned to the ground during the early forties and for many years the ground lay unused and derelict before being transformed into its present busy industrial site. Swan’s Mart with its lush green fields continued to function, not just as a busy cattle market, but also as the venue for horse shows, agricultural shows, the annual horticultural show and the village picnic where every family gathered
to run races, generally to have fun together and then feast on delicious Featherstone’s buns.

“They used to drive the beasts down and underneath the bridge, passed the hotel to get to the loading
banks" 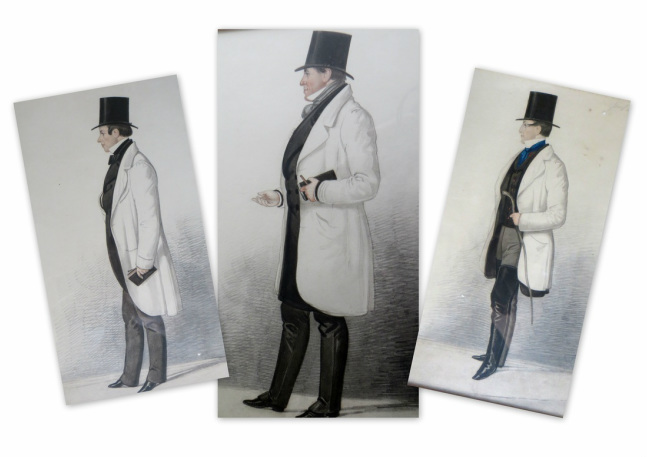